How to Develop a Character 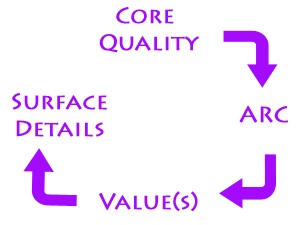 There is no story without character. You can have beautiful scenery, an excellent plot, driving action — but if you have flat characters, then you have a flat story. No matter what.

People want to be able to connect with your characters. Love, interest, compassion — even loathing a character is a form of connection. We would not bother to loathe them if we did not care about them at some level.

So how do can make three-dimensional characters that your readers care about?

Step 1: Decide what quality your character will represent

All well-written characters represent some quality that readers can connect to. Lord Voldemort represents “ultimate evil”, Harry Potter “boundless courage and self-sacrifice”. Frodo Baggins represents “incorruptible goodness and persistency”, Aragon “faith and loyalty”. Anyone who tries to describe these characters would come up with some variation of these terms. These qualities are the “core” of the character, their basic essence, the part of them that shines through when all else is stripped away.

What quality forms the “core” of your character?

A character arc refers to how a character grows in their basic quality over the course of a story. For instance, over his seven years at Hogwarts, Harry Potter [*spoiler warning*] goes from welcoming his friends’ help in defeating Lord Voldemort (e.g. the Sorcerer’s Stone) to trying to refuse their aid because it is too dangerous (e.g. Order of Phoenix), to leaving them behind and giving his life to protect them (e.g. Deathly Hallows). Frodo Baggins is a paragon of goodness, but the longer he carries the One Ring, the more his goodness begins to corrupt, until greed wins over him in the end. Voldemort begins life as a boy with a dark side, whose evil nature eventually transforms him into the most feared wizard of all time. [*end spoiler*]

How will your character change over the course of your story? Will they grow into their “quality”, or will they lose contact with it in the end?

What is really important to your character? Is it friendship…or power? Is it quality of life…or immortality? What would they never want to do because it would mean flying in the face of their innermost quality? No matter how much he hates someone, Harry Potter would never kill them; Lord Voldemort is so power-hungry that he would never permit himself the vulnerability of falling in love. Deciding your character’s values allows you to place them in situations where they can demonstrate their commitment to their values, and their struggles to uphold them. Strong values make for strong characters.

What does your character value above all else, and consequentially, what is their greatest desire and fear?

Step 4: Flesh out the rest

Once you understand where your character is coming from, what drives them and what holds them back, you can add on the “fleshy” details to their character skeleton. Fleshy details are those aspects that are immediately visible to your readers and those in your story — what your character looks like, where they’re from, what they’re called, what their profession is, their personality, etc. You can decide what in their childhood made them so power-hungry, or so afraid of intimacy, or so pure of spirit. You can decide what in their future will make them or break them. Everything you add will serve to reinforce your character’s qualities. They are no longer flat — they are human.

What are the details of your character’s life that has made them and will make them into the person they are? What do we “see” when we look at your character?