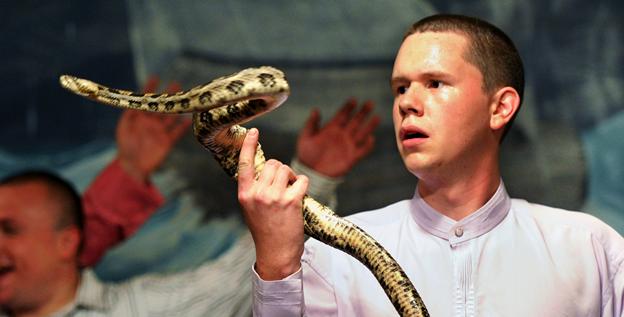 I first came across the term “Snake Handler” in the book The Year of Living Biblically: One Man’s Humble Quest to Follow the Bible as Literally as Possible. The image that immediately came to my mind was of people wielding long sticks with hook-like ends that I’d seen used in the past to lift snakes from one place to another without the handler having to get too close. Perhaps in secular circles, the term “snake handler” means exactly that. However, in religious contexts, the term refers to something very different.

“And these signs will accompany those who believe: in my name they will cast out demons; they will speak in new tongues; they will pick up serpents, and if they drink any deadly thing, it will not hurt them.”

Furthermore, they believe that they can show their faith and devotion by handling (i.e. picking up) snakes (especially the poisonous kinds)! Several have been handing venomous snakes for decades, and even seem to achieve a kind of transcendence after they have done so.

I have no trouble believing that the God who saved Daniel from the lion’s den and who protected Shadrach, Meshach, and Abednego from the flames of a furnace set to seven times its normal heat can protect His people from venomous snakes and deadly drinks. However, the snake handlers’ ritual seems to show a lack of understanding and respect for the purpose of this verse. After all, God does not say, “Go pick up serpents,” and “Go drink strychnine” (as some snake handlers do as well, in order to “fulfill” the latter part of the verse). In fact, with regards to deadly drink, God specifically says “if” His followers drink it, He will protect them, but that is like saying, “If you get in a car accident, your seat belt will protect you,” not that you should deliberately get in an accident just to fulfill the promise of protection!

The ultimate example of this, of course, is Jesus. In Genesis 3:15, God says to the serpent,

“And I will put enmity between you and the woman, and between your seed and her Seed; He shall bruise your head, and you shalt bruise His heel.”

The capital H’s on “He” and “His,” as well as the capital “S” in “Seed,” indicate that God is speaking not just of Eve’s descendants in general, but specifically of Jesus the Christ. Indeed, Judeo-Christian tradition has long accepted this verse as a prophesy regarding the coming Messiah. However, did Jesus go around stomping on all the snakes he saw, or better yet, seeking them out specifically to stomp on their heads, in order to fulfill this prophesy? Of course not. Figuratively speaking, He “bruised” sin (the serpent and sin have been equivalent in Judeo-Christian religion since the Fall from Grace) when he paid for our sins on the cross. Literally, He may well have bruised a snake in real life, too (though no mention of this is made in the Bible) — they certainly would have been very common at the time. However, he definitely didn’t seek out snakes to stomp simply to prove this verse.

In the same way, it seems unwise for snake handlers to tempt God by deliberately engaging in dangerous activities like handling snakes and drinking poison, just so He can protect them. Indeed, Jesus has the final word on this in Matthew 4:5. The devil says,

“If you are the Son of God, cast yourself down: for it is written, He shall give His angels charge concerning you: and in their hands they shall bear you up, lest at any time you dash your foot against a stone.”

“It is written again, You shalt not tempt the Lord your God.”

If the Son of God is not willing to engage in an activity simply to receive divine protection, how can those who practice things like snake handling specifically to show their faith and devotion, do otherwise?