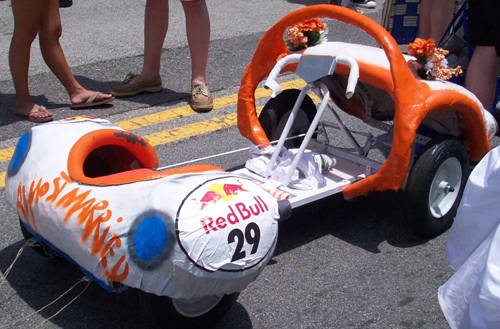 I woke up at 11:00 am and had barely gotten dressed when there came a knock at my suite door. It was a group of eight of my fellow corps members (most of whom I didn’t really know except by name) wanting to know if I’d like to go see the Soapbox races with them. I had no idea what that was, but I said sure. They were going to grab brunch first, so I used that time to finish getting dressed, and then I went down to meet them outside the parking garage.

At first, they wanted to cram everybody (nine people) into one car, but fortunately, I wasn’t the only one who felt uncomfortable with that, so we ended up taking two.

It was impossible to find parking. From the brief description my fellow corps members gave me of the event, I was expecting an “event in the park” style event, but I’m pretty sure there were more people there than at the Calaveras County Fair. It was also way more fun than the fair, too, but I’ll get into that later.

So anyway, we were still about a mile from the event, but could not get any closer with our car. We parked in a lot about six blocks off to the side and several blocks down from where we needed to be, and hiked the rest of the way.

It was quite crowded. We passed under a big Red Bull arch (I didn’t realize until later that the event was sponsored by Red Bull, and so I wondered at the arch and why there were so many Red Bull concession stands). Because I didn’t know what the event really was, I didn’t quite understand what I was seeing when I saw Batman, Superman, and Wonder Woman all standing around a small tube-like construction, or later on down the path a car like the Flintstones’, complete with Fred Flintstone and Barney Rubble. Finally, I realized that I was looking at a line of cars all waiting for their chance to race. The cars ranged in size from about four feet long to about ten, and some were the same distance high. There was even one for Georgia Tech. The street bordered a park, and there were loudspeakers lining the verge. Considering the size of the crowd, I must say that this was the best sound system I have ever heard. All the words were loud and crisp, and I could understand everything that was being said (no matter if I was half a mile away or very close). It was brilliant.

The track was actually just half the street (the street was on a slight hill) that had been lined with hay bales. Only one car would go down at a time. there were some ramps that elevated the car a couple of feet off the ground (it had to survive the landing), and points were assigned based on creativity, performance, and time. The Flintstone car was my favorite, though there was also a Penguin car, a pair of High Heels (they actually moved up and down as if they were walking as the car traveled), and many, many more.

It was rather hot and I hadn’t brought any sunscreen with me to Georgia, and I’d neglected to bring my hat. Being the creative individual I am, though, I improvised. (That’s my jacket, in case you can’t tell). All in all, the Soapbox races were the most fun I’d had yet!