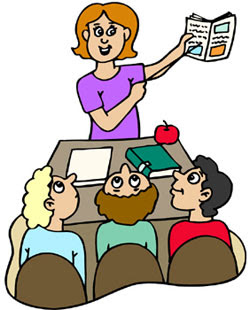 Once again, I am writing this blog post well after the fact. (I got only 45 minutes of sleep on Thursday, so I was in no shape to write anything by Friday.)

Today was actually a pretty neat day. I forget what we did in the early morning, but we spent the mid-morning section learning about the behavior management cycle (state directives, narrate behavior, and take corrective action). I definitely drifted for most of that session (the majority of which was video watching) and almost lost my balance sitting in my chair at one point due to exhaustion.

However, after that session, we returned to our CMA groups and practiced teaching a class. During this time, our CMA (Corps Member Advisor) would goof off and we would have to correct him. (My CMA plays dirty when he acts up. He’ll turn into a total kid, but when you correct him and deliver his warning, his face will turn all scared/innocent child. It’s a real heartstring tugger, and I have to remind myself, “Be strong, girl, be strong!”) I messed up a bit (at least to me) on my content, but I guess I did pretty good at correcting his behavior, and according to the group, I have a really warm, nurturing voice when I teach.

After practice was lunch, and I eschewed eating for putting my head down on my desk and sleeping. Next, we got to choose whether to attend a seminar on behavior management or content, and I chose the latter. We didn’t really do much, but that was okay.

(Note: There was supposed to be a sushi social that evening for the corps members at BEST Academy, but after fighting all day to stay awake and alert, I just told my CMA I was going to go to sleep instead of attending it. If the FAs and other school personal had been going to be there, I would have forced myself to attend, but it was just going to be corps members, and I could see them in the dining hall just as easily. Sleep wins out over socialization any day.)

We finally got to go upstairs and decorate our classrooms. Our CMA gave us a lot of college banners (I made sure to pick out some West Coast schools like Stanford and UCLA), and my team and I decorated the room with those and with Olympic-themed cut-outs. We had to rush to clean up and get to our next session on time, but our room looked a lot more cheerful than it had before we got there.

The last session of the day was a meeting of the BEST Academy corps members in the library. We had a toast to having finished our first week (I abstained from the wine) and then did a “Shout Out” where we called out the name of a person who had done something special/been really helpful to us, and said why we were shouting them out. I wanted to shout out my CMA, but I’m really shy about calling out in a group like that and couldn’t quite think of what to say, so someone else from my group did it instead. Then we did an exercise where we looked over a paper an eighth grader had written (it was on the level of a first grader) and practiced looking not for the weaknesses of the paper, but for its strengths, as well as ways we could use those strengths to further the student’s improvement as a writer. It was a good exercise. We ended by getting in a big circle and doing a clapping game where we called on someone and they had to say what they were going to be doing this weekend (answers ranged from “sleep” to “drink” to “sleep). It was mostly the CMAs who got called. Then the buses came and we went back to Georgia Tech.

I really wanted to go to sleep, but I was cognizant of the fact that if I did, I likely wouldn’t wake up in time for dinner. I was really hungry, too, so I just went to the dining hall. That was a mistake. I got there just after the Lacrosse camp did and had to wait 45 minutes to get my food. At last, more-or-less full, I went back to my dorm. I glanced over the objective for Tuesday’s lesson plan (due tomorrow at midnight), but did not worry about it. Figuring it was too early for complete sleep, but that I could at least take a nap for a few hours, I crawled into my pajamas at 7:00 pm and went to bed. I did not wake up again that night.

* Note: I think the hardest part about Institute is not the amount of work you have to do, but the fact that there’s no reprieve. I’ve literally been going for twelve straight days without a single break, and even things like lunch aren’t really free time, since it’s used to reflect on the day’s events and on what you’re getting out of it.