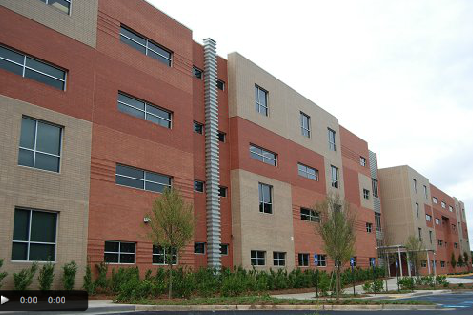 I am so tired, but I am going to tell you about my day instead of going to sleep. You should feel very important, because you are!

5:00 am didn’t dawn (it was still dark), but I got up anyway. Rather, I fell down, as my bed was about four feet off the ground. I ended up getting a rugburn on the top of my foot from the fall, but at least I didn’t break a leg.

I left my apartment by 5:55 am to go pick up my lunch for the day. The mentor in charge of the line made me leave my computer bag outside, even though I had been told yesterday that I could take it through the line. Inside, they gave us a collapsed plastic envelope that turned out to be a fold-out lunchbox. I grabbed a cheeseless turkey sandwich and a water (I debated getting a Coke, but I figured water would be more important and I could always have soda with dinner) and a cookie (though usually I don’t like store-bought ones, so I probably wouldn’t eat it).

Lunch in hand, I went to go get breakfast. There weren’t a whole lot of options, but I grabbed a big croissant and a very small chocolate muffin and scarfed it down in five minutes. I didn’t want to be late — the buses pull out promptly at 6:25 am and if you miss your bus you have to call a taxi to get to school. You’re not even allowed to drive yourself if you have a car. (I’ve heard that the bus drivers actually had to sign a contract that said they’d leave us behind if we were late.)

I boarded the bus at 6:15 am — plenty of time. There were two buses for my destination, but still enough corps members going to my school that we had to sit two to a seat. It has been about ten years since I’d ridden a bus! (Wow, freshman year of high school suddenly seems very far away.)

The school I had been assigned to was called B.E.S.T. (Business, Engineering, Science, Technology) Academy. It was about a ten minute bus ride. Looking out the window, I saw roiling thunderheads that looked dark and luminescent at the same time. They were traveling quickly, then all of a sudden, they stopped. It reminded me of Independence Day.

The school building was made of brick and looked very new. A plaque inside it said it was LEED 2012 (that means it’s a Green Technology building that was completed in 2012), so yes, quite new. When we got there, we were told to leave all our stuff in our CMA’s (Corps Member Adviser’s) room. Then we signed in for the day and went to our CS (Curriculum Specialist) class. Upon arriving, we were told that we needed our laptops after all, so we had to go back to our CMA’s room and get them.

There was a projector set up, so I sat in the very front (otherwise it would have been a strain to see it). Only one other person joined me at my table (even as teachers, we’re afraid to sit in the front of the room!)

We began the day by relating to those at our table our Story of Self, which was a bit of a repetition from Induction. This time, emotions did not run quite as high, but it was still a very personal experience.

We had a short break and then began a discussion about “Establishing Vision and Goals.” Basically, we talked about the importance of having a vision for what we want our class to achieve/accomplish in the big term (we’re talking graduate school here), and then backwards planning down through college, high school, middle school, and elementary school in order to discover the exact goals that our class needed to achieve in order to be on target for attaining their dreams.

We had lunch with our CMA in our CMA’s room. He had bought us a mug (with our name post-purchasedly written on it in Sharpie), some post its, some Life Savers, and a pen. We introduced ourselves and then chatted a little. He told me that he had bought my book and that it was “dangerous” because it was so addictive. He had started to read it last night and hadn’t wanted to stop, which had been a problem because he had still needed to do a lot of work. Apparently, he had found deciding which to do quite a dilemma!

After lunch, we studied an alum (one of our mentors) who had won the Sue Lehman award for excellence in teaching. We compared his written “vision” for his classroom from when he first started teaching with the one he had developed after a year or so of experience, and we heard just how important a good vision was (it’s literally the difference between a student going to jail and a student going to the best school in the state).

Then we studied how our biases about a person’s fitness can prevent us from interacting with them in an effective manner. This bias might be due to race, or how we think they parent, etc. We also explored how part of being sensitive to diversity means trying new things. Like if a parent says her child responds well to forceful (almost shouting) commands, then you should try that, even if you don’t like raising your voice at a kid. This attitude surprised me, but on second thought, it makes sense. Start out with what works for the child, and as you develop a rapport with them and they come to trust you, you can slowly transition to what works for you.

That conversation ended our CS session, and we returned to our CSA room to meet with our teaching team. Our Corps Member Advisor gifted us all with a journal, and we wrote three things we were excited about, two questions we had, and one thing we were nervous about, and then shared. Soon, it was time to return to the university.

We waited outside for the bus. There were two in charge of taking us to and from B.E.S.T. — bus 14 and 15. I’d ridden 14 this morning, but it was 15 that came up the street first. It was going quite fast and wobbled as it rounded the corner. I was too tired to wait for the other one, though, and climbed aboard. The seats were more torn up on this one, but I didn’t care. I soon fell asleep.

I woke up just as we were pulling into the university. It was 4:45 pm, and dinner wouldn’t open until 5:00 pm. Teach for America would be holding Welcome Ceremonies at 7:00 pm, so I decided to go to my room and sleep for an hour, go to dinner, and then go to the ceremonies. Once in my room, however, I determined that it would be better to write about this day first so that I could sleep for longer tonight. At 6:20 pm, I went to dinner. (I sense that my meals here are going to consist primarily of pizza, so I’m not going to write about them anymore unless they change.)

At 6:40 pm, I headed out for the fifteen minute walk to the Ferst Center, where the Welcome Ceremonies would be held. Georgia Tech students were spaced out along the route, holding signs or waving big pointing gloves to make sure that we didn’t go astray.

When I got to the auditorium, it quickly became apparent that my section’s seats were already full, so I had to sit with another corps. On the way, one of our mentor instructors from this morning stopped me to say that he had appreciated my contributions to the discussion this morning, and liked how I thought. He said he thought I was very creative and once I developed the passion for teaching that was inside me, I would be a really good teacher. That was nice to hear.

The ceremonies began with each corps group shouting chants that they had devised. Since I was sitting in the wrong section, I couldn’t really join in (either with my own corps or the other) but that was all right. It was quite fun to watch.

The ceremonies began with a welcome by one of my school’s mentor teachers, where he said that when people asked him why he must succeed at what he does, he always answered that “Failure isn’t an option.” Then we watched a short inspirational video and got welcomed to Atlanta by another mentor. Then the director of Kipp Metro Atlanta talked a little, as did a recent (2012) high school graduate who had been one of our mentor’s students, and who (due to that mentor’s influence) had not only aced his ACT test, but had also become a Gates Millenium Scholar, his high school Valedictorian, and had earned 1.5 million dollars in scholarships. Wow! The session culminated with another short video and talk, and a reminder that attainment of TFA’s goal, “One day all children will have the opportunity for excellent education,” begins today.

The Welcome Ceremony had been short, but inspiring. It’s purpose wasn’t to inform, but to stimulate. Based on the comments by my colleagues as we filed out of the auditorium, it did just that.

Back the my room, I finished up this blog post and got ready to take a shower. I took out my contacts and then belatedly realized that I couldn’t find my glasses. I searched everywhere I had been that morning, backtraced various scenarios in my mind, and finally walked around with my nose near the carpet to see if they had fallen on the floor. Sure enough, they were underneath my desk. Phew!

Well, I did it! I went to bed before midnight (it was barely 10:00 pm — hopefully, I’d sleep through the night). You should be proud of me.

Talk to you all tomorrow!