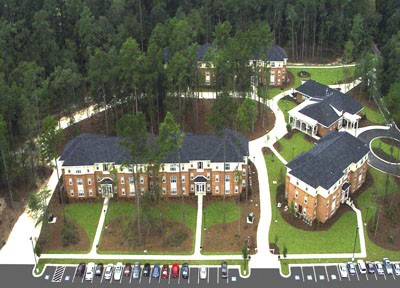 I was picked up from Amtrak by Josh Bell, the executive director for the South Carolina TFA region. During the short drive to Francis Marion University (the place where Induction would be held) he asked me a lot of questions about what I’d been doing in the intervening years between college and TFA, and what had interested me in the program. He also told me a little bit about the town (how far we were from the beach, etc.) and a bit about his wife’s experience teaching third grade. When we got to the University, he helped me carry my bags inside to where I was supposed to register.

There weren’t really any other newbies there yet, but there were several staffers who greeted me happily and gave me my room key, a binder full of Induction information, and two liability release forms (hmm…). They also gave me food =) (A turkey sandwich, chips, chocolate, and soda). I had to make several trips to carry all my things to my room.

We were placed in apartments and assigned a room (actually assigned, not given a choice) within them. I was on the first floor in a four-room suite with two bathrooms (and two sinks per bathroom), a kitchen, and a living room area. It was pretty nice, although the walls were a bit dinged up in places (but hey, that’s college).

I spent the next hour or so talking with my suitemates, figuring out how to connect to the Internet, looking over the binderful of papers TFA had given us (they mostly consisted of a daily schedule for the following week), and not unpacking.

At 3:30 p.m., we all went over to the dining hall — not to eat, but to have our first get together. The start of the meeting was a little delayed because people were still arriving. We were assigned tables to sit at, and we talked a little amongst ourselves while we waited. Then Josh Bell talked to us briefly about how excited he was to have us all there and (re)introduced us to the key concepts of Teach for America. Natalie Martin talked for a little bit (I was really tired by this point and was trying hard not to fall asleep — though since I can’t remember what she said, I’m not sure how well I succeeded), and all the staff members were introduced. As a culminating activity, we split into new groups and did a partner exercise where we exchanged questions/answers about ourselves with someone else, and then had to introduce our partner to the group and tell them what we had learned. By the time the meeting was finished, it was 5:50 p.m..

We returned to our dorms briefly before meeting outside at 6:15 p.m. to go to dinner. (We were placed in new groups yet again for the vans). It was quite crowded in the vans — about 15 people per vehicle — but still comfortable, and we all had seat belts. The place where we were going to eat was called “Southern Hops” (hops, as you may or may not know, is a flower used to flavor beer).

We had to wait a while before we could go get our buffet-style appetizers, and our table actually got tired of waiting and ended up skipping ahead of another table to go get in line for our food (hey, we were hungry!) I was fortunate enough to reach the appetizer line just as they were bringing out the pizza, so I got real food, too. The pizza was pretty good (pepperoni pizza sans pepperoni for me), even if the crust tasted like a pretzel.

Everyone was talking (we were sitting at three cafeteria-length tables placed adjacent to one other) so it was very hard to hear anything at all. Also, the servers didn’t bring our table drinks for the first 1.5 hours, which was a bit annoying as we were all thirsty, but other than that (and other than the fact that we really stayed far too long, to the point where some of the corps members — no, not me — were beginning to nod off over their food) it was good.

When we returned to the school, it was 8:40 p.m. and our obligations to TFA were over for the day. Two of my suitemates wanted to take a walk around the (now dark) campus, and I gladly went along. (I’m trying to be sociable, although I’ll admit it is hard for me — most writers tend to be rather introverted.) Still, it was a very pleasant walk, except for when we almost stepped on a bunch of cockroaches scurrying across the sidewalk. The only time I’d ever seen cockroaches before was in Costa Rica. I certainly wasn’t expecting to find them in the middle of a beautiful college campus!

When we got back to the suite we decided to test out a button on the wall outside of our room that said “If disabled, press for 5 seconds” which made an alarm go off in our room and a light flash. Our third suitemate, who had stayed behind, was quite startled by our experiment (we decided, by the way, that the button must be some sort of doorbell for disabled people). This put our conversation on the subject of college pranks, and I showed the others some pictures of pranks that Mudders had pulled during my time there (such as converting one person’s dorm room into a forest, complete with a sod floor and planted trees). Then we talked for a while longer before going our separate ways to showers and bed.