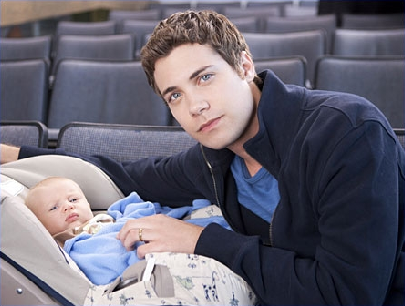 Freshman Father chronicles the journey of two high school seniors who are in love, but whose love leads to the girl getting pregnant. Rather than giving up on his Harvard dream, the boy and girl marry and both move to Cambridge so the boy can attend Harvard. Difficulties arise as the boy fights to maintain his scholarship, even though he’s close to failing Calculus. Once the baby is born, the situation intensifies — both academically, and on the home front.

Summary From: The Hallmark Channel

The responsibility of parenthood weighs heavily on Harvard freshman John Patton and his wife, Kathy. Overwhelmed by the pressures of young motherhood, Kathy makes the difficult decision to leave her new family. To make the grade and stay in school, John must figure out how to balance the heavy workload of college with being a single parent to his newborn son. Based on a true story. Stars Drew Seeley, Britt Irvin, Kim Zimmer and Annie Potts.

I don’t recall any profanity from anybody in this movie, not even when characters are angry.

We see two characters kissing at one point, and we later learn they have had sex (based on the fact that the girl gets pregnant). This is necessary, as the premise of the movie explores the consequences of that action. Later on in the movie, there is some platonic cheek-kissing, and we see the same two characters in bed (although by this point they are married, and the scene is entirely platonic). There is nothing gratuitous here — everything presented in the movie is an affirmation of love and family. I would have no problem letting a child watch this.

Characters get angry, but there are no violent words spoken against anyone, and the most violent action is someone shutting the lid of a suitcase with force.

The girl’s mother is said to be religious, although the girl herself isn’t shown to be one way or the other. The couple are married in a church, and at one point the idea of abortion is briefly discussed, though never by name (rather, a person has to infer what’s being talked about — a child and even a young person will probably miss it). One lady aids the freshman father, and she is a “psychic.” We see her reading the boy’s fortune (although he claims not to believe in it) and she talks about “auras” in one scene. She’s shown as eccentric and wacky, but is a kindly figure. We never see any characters praying or calling on God.

In terms of action, this movie is no Transformers. It is thought provoking and its camera-work focuses on the characters, not the setting. In terms of content and acting, this movie is superb. I was impressed with the way the actors handled their roles and the emotions they were able to evoke from the viewer. The lead actor reminds me of a young Kirk Cameron, except better.

This is a movie that every high school sex-Ed class needs to watch.

This is a Hallmark movie, so there’s nothing even semi-inappropriate in it. I was amazed with how much grace and character the boy portrays in this film. He is everything a new father should be, he has his priorities right, and he never mistreats his family. His emotions in this movie are real, and his difficulties unfeigned. Not every situation he encounters has a positive outcome, but that is part of what makes this movie so great.

Freshman Father successfully shows the complications that arise when youngsters enter relationships they are not ready for, and also how in spite of those complications, it is possible to be a good parent without giving up your dreams. It is an excellent movie and its main character a role model for young men.

Conclusion: In a world where kids are too often encouraged to abandon (or abort) either their responsibilities or their dreams, this movie offers students a role model and a guide to being a heroic parent.

Anyone can watch this movie, but I think it will have the greatest impact on young adults who are going to be/already making choices that will impact not only their own futures, but also their kids’.