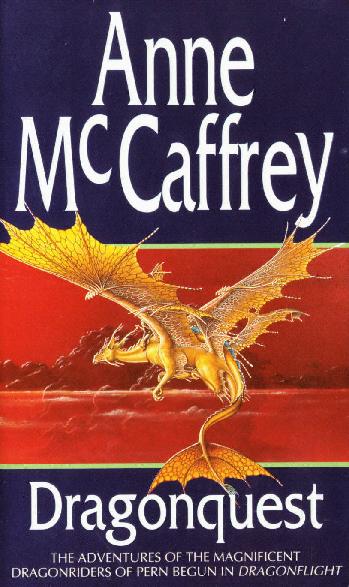 Everything seems to be going wrong. The Oldtimers Lessa brought forward in time to help fight Thread are hostile and unwilling to accept the changes that have occurred over the last 400 years. Thread is falling out of pattern, and the Lord Holders want the dragonriders to mountain an expedition to the deadly Red Star! Somehow, Lessa, F’lar, and Masterharper Robinton must regain control of the planet before all is lost!

There is some angry name-calling in this book from both good and bad characters.

There are a lot more references to sex and sexuality than there was in Dragonflight, but it is still kept pretty high-level. Children won’t pick up on most of it, and those they do pick up on should be light enough not to imprint. There is one “sex scene” between two characters, but nothing is described and youngsters may not evven know what is going on.

Characters get angry, and there is a major fight involving daggers at one point. Although the fight is described in detail, injuries are not.

Anne McCaffrey’s writing is superb, although occasionally action sequences are hard to follow.

I like this book a lot, but I found it more cluttered than Dragonflight. By that I mean there seemed to be a lot going on in a very short period of time, and occasionally it felt rushed. Nevertheless, the book is an excellent read and a worthy sequel.

Any age would enjoy the world McCaffrey created, and although I sense it was written for an adult audience, to my mind, the prose is best-suited for a middle school to high school readership.