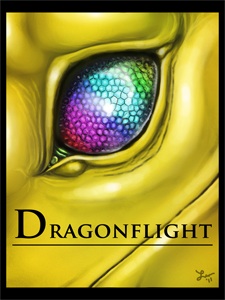 A girl named Lessa plots revenge on her family’s killer…. A man named F’lar bides his time until he can take over the Dragon weyr, and gain control over all of Pern…. Together, they will revitalize their dying society and save their planet from the deadliest menace of all: Thread!

There is no profanity in this book, and only some light name-calling from a bad character.

The sexuality in this book is very light, with most occurrences merely implied, rather than stated. There is one scene in which a character muses about another’s virginity, but it’s not graphic at all.

There is one fight scene where one character is injured and another dies. People get scored by acidic “Thread,” and one dies. We aren’t regaled with gory details, but the violence is definitely present.

At first the prose might be a little confusing, simply because Anne McCaffrey has created a whole world with its own terms and she isn’t shy about using them. Such elements quickly clarify themselves, however, and the story draws you in and doesn’t let you go.

This book is one of my favorites, and will be until the day I die. The characters have a vitality that is gripping and exciting, and the best characters of all — dragons! — are absolutely charming. Everything in the story ties together, and no plot line is left unresolved.

Any age would enjoy the world McCaffrey created, and although I sense it was written for an adult audience, to my mind, the prose is best-suited for a middle school to high school readership. Boys and girls alike will adore the strong and fiery Lessa, and the cunning yet mysterious F’lar. As for the dragons…well, we are all truly dragonmen at heart!