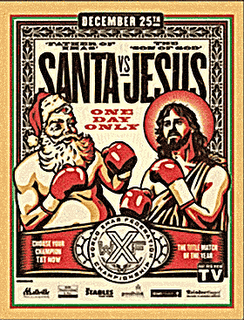 Am I missing something here? Since when did Christians start worshipping Santa Claus, not Jesus?

Every year, Calabro School invites students to take pictures with Santa Claus for $1.00. So far, no problem. Then this year, a Jewish parent objected that other religions weren’t represented, and as a result the school rescheduled the photo shoot to include more diversity. All right, I’m cool with that. The final photo shoot featured a menorah (for Jewish Hanukkah), a kinara (for African Kwanzaa*), and Santa Claus.

Houston, we have a problem.

The parent who objected complained that other religions weren’t being represented. Since when is Santa Claus a religion? Granted, some people believe that he had his origins in a Christian saint who lived nearly 2000 years ago, but no one has associated Santa Claus with Christianity in a long, long time. It’s a completely secular construct. That’s why towns that ban Nativity scenes are okay with having Santa Clauses posted on street corners. Because it’s secular.

So if schools are going to reorganize photo shoots and holiday crafts and everything else to include things like religious menorahs, I say go for it, but I want to see a Nativity scene or a manger there, too. Because Christmas is a Christian holiday, and it’s celebrating the birth of Jesus, not Santa Claus. So if people like Superintendent Toback claim they’re featuring “Hanukkah and Kwanzaa traditions as well as the Christmas tradition,” then they had better feature the Christmas tradition! So bring on the menorahs and the kinaras, I say, but bring on the Jesus, too.

* Kwanzaa is not actually a religious holiday, but rather a celebration of African culture and heritage