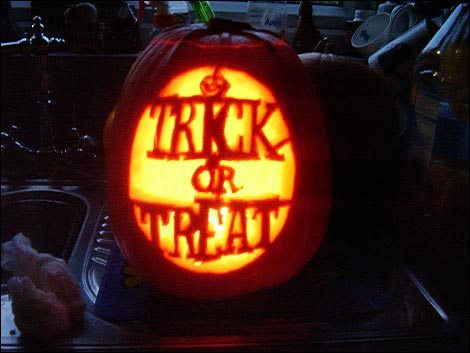 Ok, I admit it. I went trick-or-treating.

Yes, some people might say I’m a little too old, but what can I say? It’s free candy!

It was a nearly perfect evening. The weather wasn’t too cold for my Native American costume, the hills we had to climb were exhilarating but not steep, and the streets weren’t too crowded. The only shadow occurred towards the end of the evening.

The shadow of a candy wrapper.

It was lying there in the middle of the drive, an empty Snickers wrapper, all shiny gold and silver. And only a few feet away from it was another. And another.

I was struck by the insensitivity of the little goblin (or pumpkin, or Power Ranger) who had dropped their trash in the drive. Here they have people giving them free candy, and then they go ahead and litter those people’s yard? I mean, how hard is it for them to drop their trash into their shiny trick-or-treat bag, rather than leaving it strewn on the ground?

All these thoughts ran through my mind while my brother called for me to hurry up. I scooped up the trash and put it in my own bag as I hastily caught up.

By the end of the evening, my bag had more empty candy wrappers than it had full ones, and not a speck of sugar had crossed my lips. I felt saddened by the callous disregard for personal property, the environment, and just common courtesy that I was witnessing. I thought of all the trick-or-treaters who had passed by the wrappers before me, ignoring their gleam in their quest for more candy, or had perhaps contributed to the trail of trash themselves. I suppose I could have turned a blind eye to the detritus, but even on a night famous for its immorality, I could not stand to lose my own. I could not simply walk by, and so what began as a night of cheerful candy acquisition on my part soon became simple garbage collection.

Maybe I am too old for trick-or-treating after all.