Failing Our Founding Fathers: Separation of Truth and State 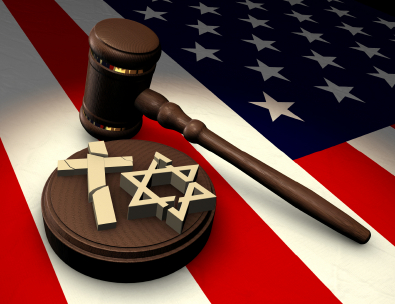 Are people so afraid of the Truth that the mere mention of God is enough to set them howling to Court?

I mean, consider Santa Claus. Most people over age 10 do not believe in Santa Claus. Yet no one cares if teachers read their students “The Night Before Christmas,” or put a picture of Santa Claus on their classroom door, or pass out Santa Claus stickers. But they will sue a teacher (see original story here) for having a banner that reads “In God We Trust” (the phrase on our national coinage), “One Nation Under God” (from our national pledge of allegiance) “God Bless America” (sung at many national ball games), and a few other historical phrases, including one from the Declaration of Independence. (I won’t even go into the fact that the Declaration of Independence is absolutely riddled with references to God, other than to ask: do we have to ban it from our history textbooks now?) It is not as if this teacher was “preaching” to his students, any more than hanging a picture of Santa Claus would “force” them to believe in his existence. If people can dismiss the one, then why not the other?

But what really leaves me gasping for air is not that this case went to court, but that a judge then ruled that the teacher has no constitutional right to display such a sign. Excuse me? What Constitution are you looking at?

The Constitution I studied in school never even references God or religion, or what a person can or cannot say in school! The phrase “separation of church and state” NEVER (let me repeat, NEVER) appears in the Constitution, or the Declaration of Independence, or the Bill of Rights, or any of the subsequent Constitutional amendments. What does appear is the following:

That means that our government cannot establish a national religion, and MORE IMPORTANTLY cannot prohibit a person from exercising their religion — NO MATTER WHAT! (The only exception is when a religion calls for human sacrifice or polygamy or something like that, in which case the government can interfere, according to an 1879 Supreme Court ruling). Contrary to what that judge may have thought, teachers have EVERY Constitutional right to display such banners in their classroom!

The problem is that people (even judges!) have come to believe that the phrase “separation of church and state” is derived from our Constitution, and worse, because they are taking it out of its true context, they have completely distorted its original intent.

The phrase “separation of church and state” was originally written by then-President Thomas Jefferson in a letter to a group of Baptists, in which he reassures them that the United States was not about to make a “national denomination” of their rival Congregationalists. He essentially states that a “separation of church and state” exists which precludes Congress from establishing a national denomination (note: the key word here is denomination, not religion. Jefferson assumed, as did all the founding fathers, that Christianity was and always would be the national religion). That is ALL.

Unfortunately, no one ever looks at the context of the phrase “separation of church and state” anymore. Few people really understand what it was being used for. Worse, is that many people (including judges) assume it is somewhere in the Constitution. It is NOT. (An interesting fact: every time this phrase has been quoted IN CONTEXT in court — including in the Supreme Court — the subsequent rulings have supported religious demonstrations in the classroom and on government property. It is only once this phrased started being taken OUT OF CONTEXT that judgments like this one have occurred). Even taken out of context, “separation of church and state” is and always will be an individual’s personal opinion. If personal opinions and letters could be the basis for judicial rulings, consider the following from George Washington’s Farewell Address (leaving presidential office, 1796):

Of all the dispositions and habits which lead to political prosperity, religion and morality are indispensable supports. In vain would that man claim the tribute of patriotism, who should labor to subvert these great pillars of human happiness, these firmest props of the duties of men and citizens. The mere politician, equally with the pious man, ought to respect and to cherish them.

He is saying you cannot be an American patriot if you try and subvert religion and morality in our society!

Better still, consider these words from Benjamin Rush, Declaration of Independence signer and the first Founding Father to call for free public schools (1786, Rush’s “Thoughts Upon the Mode of Education Proper in a Republic”):

“The only foundation for a useful education in a republic is to be laid in religion. Without this there can be no virtue, and without virtue there can be no liberty, and liberty is the object and life of all republican governments… Without religion I believe learning does much mischief to the morals and principals of mankind.”

or Benjamin Franklin, one of the most excellent and influential Founding Fathers, in a speech to Congress (Constitutional Convention, 1787):

In the beginning of the contest with Britain, when we were sensible of danger, we had daily prayers in this room for divine protection. Our prayers, Sir, were heard and they were graciously answered. All of us who were engaged in the struggle must have observed frequent instances of a superintending Providence in our favor… And have we now forgotten this powerful Friend? Or do we imagine we no longer need His assistance? I have lived, Sir, a long time and the longer I live the more convincing proofs I see of this truth: “That God governs in the affairs of man.” And if a sparrow cannot fall to the ground without His notice is it probable that an empire can rise without his aid? We have been assured, Sir, in the Sacred Writings that except the Lord build the house, they labor in vain that build it. I firmly believe this.

I also believe without His concurring aid we shall succeed in the political building no better than the builders of Babel; we shall be divided by our little partial local interests; our projects will be confounded; and we ourselves shall become a reproach and a byword down to future ages. And what is worse, mankind may hereafter from this unfortunate instance despair of establishing government by human wisdom and leave it to chance, war, or conquest. I therefore beg leave to move that henceforth prayers imploring the assistance of heaven and its blessing on our deliberation be held in this assembly every morning before we proceed to business.

How about some more presidents?

“It is Religion and Morality alone, which can establish the Principles upon which Freedom can securely stand.”

“That Book [The Bible], Sir, is the Rock on which this Republic rests.”

“America was born a Christian nation. America was born to exemplify that devotion to the elements of righteousness which are derived from the revelations of Holy Scriptures. Ladies and gentlemen, I have a very simple thing to ask of you. I ask of every man and woman in this audience that from this night on they will realize that part of the destiny of America lies in their daily perusal of this great book of revelations. That if they would see America free and pure they will make their own spirits free and pure by this baptism of the Holy Scripture.”

A few other notes:

Lastly this, by French Historian Alexis de Tocqueville (1805-1859), Author of “Democracy in America”:

Not until I went into the churches of America and heard her pulpits aflame with righteousness did I understand the secret of her genius and power.

America is great because America is good — and if America ever ceases to be good, America will cease to be great.”