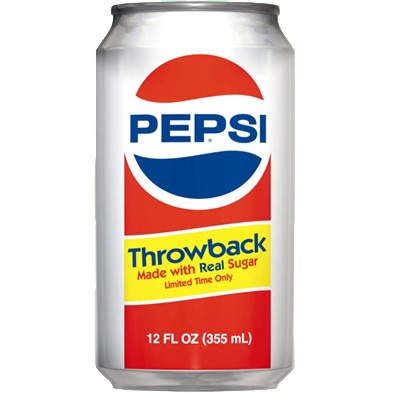 I was hooked by the third sip. The first time I tasted Pepsi Throwback, I thought…this is interesting. The second sip sparked the thought: it’s all right, kind of like a cross between Pepsi and Coke, but with a sweet aftertaste. By the third sip, I was converted.

Understand, I’ve been a Coca-Cola addict ever since I was small, and I like Pepsi nearly as much. But seconds after breaking the seal on my first bottle of Pepsi Throwback, I vowed never to drink Pepsi again unless Throwback wasn’t an option, and am teetering on making the same vow regarding Coke.

Pepsi Throwback contains the same ingredients as Pepsi, minus: High Fructose Corn Syrup and Citric Acid. Furthermore, it has 1 gram less sugar than Pepsi per 12 oz., even though it relies purely on sugar instead of corn syrup for its taste.

Coca-Cola contains no sugar at all, preferring to use only High Fructose Corn Syrup to provide its sugary taste.

But that’s not the reason I switched, although it’s a pretty good reason to me. The real motive is that later that evening, I had a cup of regular Pepsi, and I could literally taste the chemicals in it. A cup of Coca-Cola actually hurt my throat. (I give up soda for Lent each year, and it really is painful to reacclimate my esophagus to Coca-Cola when it is over. I used to think it was the carbonation that hurt so much, but after drinking Pepsi Throwback, I realize now it must be the High Fructose Corn Syrup, since Pepsi Throwback doesn’t hurt my throat at all!)

I also discovered later that Pepsi Throwback doesn’t coat my teeth the way Coca-Cola and Pepsi usually do. After drinking the “normal” varieties, my teeth always felt covered with a layer of soda and looked pretty yellow. I used to think this was due to the carmel in the soda, but Pepsi Throwback doesn’t do that, so it must have been the High Fructose Corn Syrup! My teeth are much whiter now that I’ve switched over, and that gunky feeling is gone for good.

I sincerely hope that the Pepsi company continues to produce Pepsi Throwback, and that people give it the chance it deserves. It really will rock your world. Now the Coca-Cola company just needs to do the same thing….