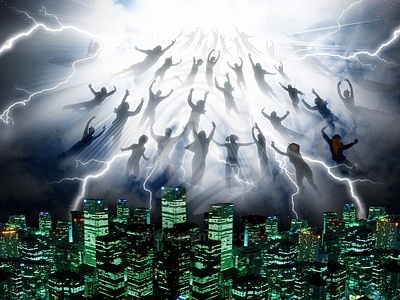 At this moment, a woman near my hometown is passing out flyers saying, “The Rapture is coming and will happen on May 21.” Ironically, she gave one such flyer to a cashier while purchasing tomatoes to plant in her summer garden. Another couple in the New York just quit their jobs because they believe the Rapture will happen on May 21, 2011, too, and feel it is their duty to warn people that “the end is near.”

My response is: WHO CARES?

For those of you who don’t know, the Rapture refers to the moment in time when God will ascend his true followers to Heaven, body and soul, in order to spare them the tribulations he will subsequently unleash on the world. God will then test the world with earthquakes and other devastations in order to sift out the people who maybe didn’t follow Him the way they should have before the Rapture, but who repent of their sins and are willing to return to Him. When they die, they will go to Heaven, while the rest of the world will be doomed to destruction in Armageddon.

Sound a little melodramatic? Maybe, but the Rapture and the Tribulation is something that most, if not all, Christian denominations believe in. A great action movie and book series that deals with the Rapture is Left Behind

. I recommend it if you want to get a better idea of what people are talking about.

When you come down to it, either:

On a more secular note, assuming that you credited their warnings, what are you going to do about it? Set your affairs in order? Who cares if your house has been swept when the world’s going to be destroyed anyway? What does it matter if it’s Cousin Bill or Cousin Fred who gets your couch when you vanish? You’ll be in Heaven, you won’t care, and anyone left behind will have far more pressing concerns to deal with.

Quite frankly, even if the Rapture were going to happen on May 21, you shouldn’t care. You’re far more likely to die in a car accident tomorrow, or have a heart attack today. Do you live your life worrying that every next second may well be your last? No! Nor should you. God says that no one knows when the end of the world will occur, except for Him, and quite probably for that very reason — because there’s nothing useful you can do about it. It is better to live your life as fully and as morally as if every day were your last, rather than worrying about some mathemagicked calendar date.