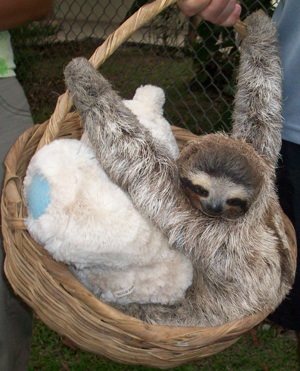 I closed my eyes but could still feel the taxi swerve across the jagged road, so I opened them again just in time to see the driver — busy talking with Mamá Tica in the front seat — veer into the other lane, nearly clipping a pedestrian runner and causing the oncoming car to veer into our lane to avoid hitting us. I squeezed my eyes shut and kept them that way until we reached our destination.

Atirro really is a small country town. The dirt and gravel roads are bordered by wide sugarcane fields and hills overflowing with green vegetation. The house where we were staying reminded me of a miniature villa, complete with a large backyard possessing a beautiful bamboo greenhouse (minus the glass) and enough fruit and vegetables to last the family for a whole year. Everything is grown by the father (called “Papí), who reminded me of the dad on My Big Fat Greek Wedding, only more happy. He loved to make jokes, many of which went over my head, since I was still getting into the rhythm of my Spanish and tended to miss the crucial word in the punchline. That might have been all right, though, since his jokes tended to be about lice and such things. The best joke I heard during my stay was:

What did the lice say to the bald man?
Don’t tip over or I’ll fall off.

He really was an old jester, though. He told me how one time there was an American student staying at his house and this student went swimming in a pond and came back with his legs covered in leeches. Papí went inside and returned wielding a machete, and told the kid quite seriously that he needed to “chop them off.” The kid’s face was apparently absolutely priceless.

My hosts gave me food to eat, which was very welcome since I was really hungry. Whether it was because they grew their own food or simply because they were really good cooks, I do not know, but during my entire stay in Costa Rica I never tasted food as good as I did during the two days I spent in Atirro. Every meal was like eating in Olive Garden, only better.

After lunch, they took me on a walking tour of Atirro. One of the neighbors came out to greet us, holding a baby sloth in a basket. A sloth is called a “perezosa” in Spanish, which means lazy. I don’t know if sloths were called lazy because they move so slowly, or if the word lazy comes from the word for the slow-moving sloth. The baby sloth was really precious. It was a foot or so long and had inch long claws that gripped the handle of the basket while its head turned slowly (and I mean real slowly!) to look at us. The face of the sloth was completely expressionless, as if it had no muscles to make faces. I got to pet it, and its fur was soooo soft! I should say hair rather than fur. The hair was about an inch long. The neighbor said that a vet had given the sloth to them to take care of until it grows up, at which point they’re supposed to release it into the mountains.

Bordering the road we were walking along were fields of caña — sugar cane. I learned from my host that caña is one of the best natural whitening agents for teeth and that the farmers who grow caña often break off pieces to eat when they’re working in the fields, which is why they tend to have very white teeth. It is only after the caña is refined into sugar that it becomes bad for the teeth, and causes cavities. The inside of caña is yellowish-white, which explains why organic sugar has a yellowish tint to it, whereas “normal” sugar is white (it’s been bleached). I would have liked to try caña, but the opportunity never arose. There is a coffee plant and a caña refinery in Atirro. The caña refinery fills the air with a sickly sweet stench all around the factory that is really terrible to smell. Looking at the factory, I had to wonder if anyone from the government ever comes to check it for quality assurance — all the equipment and buildings looked really rusty and old.

Even though I had only been gone for a short while (maybe half an hour), Papí and Mamí insisted on feeding me again upon my return. One of their sons tried to make me eat dog food by telling me that it was cereal (it looked to me like colored dog food, so I was really hesitant and not sure if I should believe him. Fortunately, the mother stepped in at that moment and stopped him before I had to make a decision).

By now, I had been awake for almost 48 hours, minus a few cat naps. Nevertheless, I managed to stay awake and talk with my hosts until about 8:00 p.m., at which point I simply could not keep my eyes open anymore. A shower and bed sounded like the best thing on earth.

Showers in Costa Rica are…odd. The shower heads point straight down and are connected to the wall by a PCV pipe and lots of exposed wires. I guess the wires are to heat the water. If you touch the head, you will get shocked. When you go to turn on the water, the signs usually read that right is cold and left is hot, as it is in the U.S. However, this is misleading, as in reality, right is hot and left is cold, which means that the hottest water is right as you turn on the shower. However, pressure increases the more you turn the knob to the left, so your options are either a powerful rush of cold water or a dribble of hot water to take a shower with.

My bed didn’t have any sheets — just a thin cover, but that was all right by me, as it was very hot. Besides, within seconds of laying down, I was asleep.