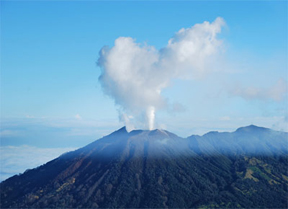 The streets of San José, Costa Rica were devoid of people as our commuter bus wended its way through the city. At first, I attributed the closed storefronts (shuttered with bars and metal gates, every one) to the early hour — 6:30 in the morning. Our driver informed us, however, that the city was usually crawling with people by this time, and that their absence had less to do with the hour than with the day — Holy Thursday. Holy Thursday occurs three days before Easter and marks the occasion of Christ’s Last Supper. In Costa Rica, Holy Thursday, along with Good Friday (the day on which Jesus Christ was killed) are the two most important religious holidays for the 85% Christian country, and most of the shops are closed during this time. Oddly enough, the people here don’t mark Holy Saturday at all (the “second day,” when Jesus lay in his tomb), and only nominally celebrate Easter — that most important day when Jesus rose from the dead and by so doing, showed that he was not just a prophet or a man, but God as well. I found their attitude toward these four days strange, but will share more on it later. The city of Turrialba sits beneath a towering volcano — Volcán Turrialba. For years, this volcano was believed to be dormant, until it exploded to life in 2008 and 2010. Due to those eruptions, it is now off limit to all but geologists (darn!) but still puffs plumes of smoke into the sky practically every day. The bus driver stopped in the middle of the road (they do that a lot) so that we could get a clearer look.

Turrialba is a sprawling metropolis of 70,000 people — not the small country town of 3,000 it was compared to when I was inquiring about this trip.

At night, up in the surrounding mountains, it looks as though you are looking down at San Francisco and the rest of the Bay, sans the bridges and water. The tallest building is the church steeple, which towers over the rest of the city by half (and yet from the ground does not look so very tall). I am told that the difference between a “ciudad” (city) and a “pueblo” (town) is that ciudades have “edificios” (buildings with more than one story), but I did not see any of these. However, since I was firmly corrected by the locals into calling Turrialba a city, they must somewhere exist.

Costa Rica is lauded as “the second safest nation” in the Western Hemisphere. Yet in spite of this, all the houses and shops in Costa Rica (in every town and city I have seen) are barred closed. Some have bars and metal gates over every conceivable opening, and I hate to think what would happen if there was a fire and you couldn’t find the key. Some have gated facades that are simplicity itself to climb over or even to step around, but still seem necessary to their inhabitants. Rather than serving as an actual deterrent, it seems that people perceive a lack of bars as an invitation to “come and rob me.” I am reminded of some of the worst barrios in Oakland and Los Angeles, and yet even these houses have less bars than do those in “safe” Costa Rica.

Breakfast that morning was bread. There are some “panaderías” (bakeries) that sell wonderful concoctions of bread filled with jams, or meats, or nuts. However, the main staple of a Costa Rican breakfast table seems to be a long loaf that looks like French Bread but tastes as dry inside as the Sahara desert. Even butter does not serve to add much moisture.

This being my first day in Turrialba, I did not explore far, but walked a few blocks down the main street to get a feel for the place. The grandest building I saw was the courthouse (so Turrialba does have at least one edificio!), which was silvery-white and looked fairly modern. It was well-lighted even at night, and I would later go there to sit or read (trying to ignore the ants that populated the steps). The elementary school was very pretty. It was gated (of course) and abutted to the University of Costa Rica. The University had the feel of a small town school, and I think it must have been an outbranch of the actual university, rather than the main entity itself. In the yard of the school sat the skeleton of a black train engine, which was wondrous to see and which I imagine must delight the school children who pass it ever day.

I have been told (and witnessed myself) that few people in Turrialba have cars (although motorcycles are becoming increasingly popular), since between the price of the car, insurance (do they even have this?), maintenance, and gas, it is much less expensive to take a taxi. (E.g. When necessity required I take a taxi in North Carolina, the meter started at $7 before the taxi had even budged, and to go one mile down the street brought the final fare to $15. In Costa Rica, a mile might cost a dollar, if that, with no “starting” fee. Since normally prices in Costa Rica are on par with or more expensive than their U.S. equivalents, this demonstrates how “cheap” their taxi system really is.) People in Costa Ricca take taxis every where — even to the grocery store only a couple of blocks away.

The grocery store I went to that first day looked like a dingy country store, but was actually a Wal-Mart grocery branch (at least, there were Wal-Mart signs and reusable bags inside the store). The “main” Wal-Mart store was a few blocks down and felt and looked like a CVS, but carried Wal-Mart’s Equate brand and likewise posted signs with Wal-Mart’s signature, and offered for sale their reusable bags. Neither of these stores carried “Wal-Mart” as part of their name, however.

I returned tired from my exploration, only to have my host mother (referred to as a “Mamá Tica” — Costa Ricans in general are referred to as “Ticos”) inform me that she wanted us to go visit her parents for a couple of days. They lived in the town of Atirro, about 20 minutes away, so my Mamá Tica called a taxi and off we went!