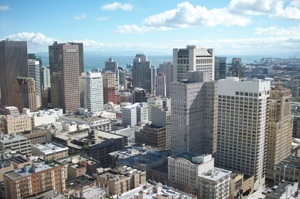 I rarely sleep the night before a big flight. Usually the reason stems from a combination of last-minute packing, things I want to do before I leave (like finish watching Anne of Avonlea) and simple adrenaline. This night was no different. I went to bed around 4:30 am, and got up to leave around 6:00 a.m.

I’ll fast forward through my three-hour long drive to the Bay Area, and focus on San Francisco. San Francisco is a city with a lot of history, and it presides over the Bay with what some would call romance and grandeur, and others would call sheer ugliness. I’ve never really formed an opinion myself, because as soon as I hit the streets of San Francisco, I’m overwhelmed by one undeniable emotion: I hate driving in San Francisco! It isn’t enough that the streets are a labyrinth of one-way boulevards (sans the trees), whereupon if you take a wrong turn (as tends to happen when you’re trying to drive and follow Google Directions at the same time), you are half an hour in getting back to where you started. Not only are two out of every three lanes devoted solely to buses and taxes. But the drivers there are crazy! I suppose in some weird way driving through San Francisco was preparation for the driving in Costa Rica. But honestly, it’s terrifying to see the cars start to zoom before the lights have switched from red to green, or cars ignore the stop lights and stop signs all together; worse are the people overconfident in their driving skills (or in the skills of those who must avoid them!) who weave in and out of traffic like stitches.

And then there is the parking. The cheapest hourly parking garage I spied was $20 an hour, or $2.50 for 5 minutes (although I did hear rumors that a few miles down, there were parking garages as cheap as $10 an hour. Gasp!). Half the meters were devoted to commercial vehicles only, and the other half had rates no less than $3.50 an hour (conversion: a quarter for 4.5 minutes). There is no free parking anywhere to be found. Astonishingly, even with gas at almost $4.50 a gallon, it still would have been cheaper to drive around town for an hour than to pay for that time at a parking meter, let alone at a parking garage. It seems incredible to me that the people of San Francisco are willing to pay such prices day after day.

So why was I paying so much attention to parking rates and parking meters when my goal was the airport? Because before I could fly out of the country, I needed to make a stop at the U.S. Passport Office.

The U.S. Passport Office in San Francisco is located on the fifth floor and is only accessible by elevator. These elevators, although they have buttons for floors 1-5, only go up to the fifth floor (so the signs say. I never actually tested this), and they are the only things in the entrance room on the bottom floor.

Why did I need to go to the U.S. Passport Office? Because the government misspelled my last name on my passport.

Perhaps you can sense that this is a sore point with me. Let me explain why. My parents originally gave me a patronymic last name and matronymic middle name, but they quickly realized that this wasn’t fair to my mom, since her name was constantly being left off documents and certificates and awards and such. They opted to combine the two names into a new last name, but the banks and schools and other establishments refused to write a name into their records that was different than the legal version. This to me is weird, since they don’t have any problem calling someone named “John”: “Jake”, for example, but they wouldn’t honor my request to call me by a combined last name. Those who did invariably tried to put a hyphen between Arce and Jaeger, or lowercased the J, or misspelled the name entirely. In the end, I gave in to my frustration and went through the legal process of changing my last name.

What does this process entail?

Essentially, it’s a lot of money and a lot of hard work.

And yet, 9 out of every 10 people still misspell my name as “Arcejaeger”, or “Arce-Jaeger”, or some other weird mutation. Whenever I order address labels, although I input my name correctly, the computer program will automatically lowercase the J. And when I submitted my passport application, even though I spelled my name correctly several times AND furnished proof of spelling, those at the other end of the line decided I had made a mistake and there must be a space in my name: “Arce Jaeger”. What do they think, that I don’t know how to spell my own name?

I mean, where is the justification? I went through all the hoops they asked me to in order to get my name changed; I did the painstaking process of submitting my passport application, wherein I’m potentially committing a felony if I submit any wrong information, and yet what penalty do they have to pay when they butcher my basic information? I ask you.

All right, end of tirade. Anyway, this is the situation that brought me to the U.S. Passport office on the day of my flight. Why did I wait so long? Because you can’t actually get an appointment with the Office until 14 days before your flight, and if I had sent my passport back by mail, not only might they have failed to return it in time, but I would have had to pay a $60 expedite fee to correct their mistake.

It amazed me to see the number of people at the Passport Office. There was one lady there with all her luggage who had gotten to the airport and then realized her passport was a month out of date. Although I pitied her plight, I couldn’t help wonder: didn’t she check the expiration date before preparing to travel?

Anyway, the Passport Office agreed to reissue my passport and told me to return at 3:00 p.m. which I did only to find a line extending out the door and halfway down the block. I guess they told everyone to come back at the same time. There’s government efficiency for you!

Finally I had my passport, my ticket, and was on the way to the airport. I won’t bore you with the details of my flight, and will only say that this was the first time I have ever flown Frontier (I’m usually a Southwest and when required, Continental person), and that they make excellent chocolate chip cookies.

Enough for now. I’ll write about Day 2 once my fingers have a chance to recover from Day 1.