Fans Finally Get to Sing the National Anthem 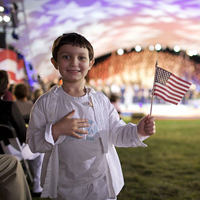 We the people of the United States of America finally get to sing our own national anthem!

The Portland Timbers is the first stadium to get smart and have their fans sing the national anthem, instead of hiring “professional” singers to do it. Isn’t that intelligent? Now they don’t have to worry that the singers will completely flub the famous words (Christina Aguilera, I’m glaring at you), since the crowd sings along to words on the giant screen. And after a while, the fans will probably learn the song by heart, too — a nice touch, considering that 2/3 of the nation don’t know the words to their own anthem! Plus, since they’re no longer spending millions of dollars on hired singers, the stadium can afford anthem extras like fireworks, flags for the fans, and so on.

But I think the best part of the Timbers’ decision is that it gives people the chance to blend their voices in truly patriotic song. When we belt out the words to our national anthem, there is a part of our hearts that just swells with pride and unity. What a feeling! And it continues beyond the song’s end, throughout the whole game and (one can hope) into the real world. The Timbers have certainly felt the influence — they haven’t lost a home game since their new tradition began.

Watch the Timber fans sing the national anthem, and maybe you can see why.

Now we just need the other stadiums to join in the fun. They could get a competition going, to see whose fans sing the anthem the best.