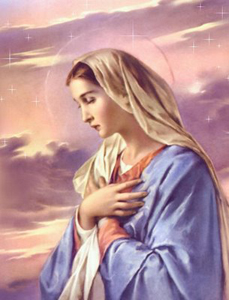 Mary is the human mother of Jesus. She is the wife of Joseph, and the (adopted) mother of John (one of the disciples). These facts are stated clearly in the Bible, and are held to be true by all Christians.

Beyond these facts are some questions — was Mary sinless? Was she always a virgin? Did she have other children? Different denominations have different answers.

Catholics believe that in order for Jesus (who was human as well as God and therefore subject to Original Sin) to be born without sin, Mary had to be forgiven of her sins in advance. She was a sinner, but God who transcends time basically took the sacrifice He knew that Jesus would make and extended it backwards to Mary, so that even though she was a sinful person, her sins were forgiven and she could give birth to a Son without sin. The case of Mary being born already forgiven of her sins is known as the “Immaculate Conception”. (Note: Other faiths, such as Islam, also believe Mary was “spotless” of sin, as said in their Qur’an).

A question this sometimes raises, though, is that if Mary’s sins were already forgiven, why did she still have to make sin offerings? For instance, in Luke 2:24, Mary and Joseph take two turtledoves to the temple and sacrifice them as atonement for her childbirth. At the time, the act of giving birth was considered to be sinful and “unclean”, and a woman had to wait a certain number of days before she could enter the synagogue again, and then offer up a sin offering in order to purify herself. Although Mary was already forgiven of her sins, no one else knew that, and quite likely neither did she. She gave sin offerings not because her sins were not yet forgiven, but because they were perceived to not yet be forgiven.

WAS MARY A VIRGIN?

Mary was certainly a virgin when she conceived in bore her son Jesus Christ. But was she a virgin after that, too?

Official Catholic doctrine is that yes, Mary was always a virgin. Joseph was her husband in the sense that God chose him to be her caretaker and protector (and at the time he needed to be legally her husband to do that, or else people would have thought they were living in sin and stoned them to death).

There are some arguments that Mary was not always a virgin, however. The Bible says in Matthew 1:24-25, “Then Joseph, being aroused from sleep, did as the angel of the Lord commanded him and took to him his wife, and did not know her till she had brought forth her firstborn Son.” This implies that he did know her after her son was born. The Bible also talks about Jesus having brothers and sisters. In Mark 6:3, the people of His hometown exclaim, “‘Is this not the carpenter, the Son of Mary, and brother of James, Joses, Judas, and Simon? And are not His sisters here with us?’ So they were offended at Him.” Many believe, however, that these were children of Joseph’s from a previous marriage, or were some related to Jesus in some other way, rather than being direct blood-siblings. The wikipedia article here goes into more detail on arguments for and against both points. One of the strongest reasons for the eternal virgin view is the discussion between the angel and Mary prior to the conception of Jesus. The angel tells Mary that she will conceive a son, and Mary replies in Luke 1:34, “How can this be, since I do not know a man?” Since the angel had given Mary no time frame, and since Mary was at that moment betrothed to Joseph, this protestation of Mary’s is taken to imply that she had sworn an oath of virginity to God, which she intended to keep even into her marriage. Otherwise, she would have thought that the angel was referring to a child that would be born from her eventual marital relations with Joseph. An oath of virginity even in marriage was not that uncommon. Many women of the time period swore oaths of virginity. They would “marry” men who became their protectors, but they abstained from sexual relations in order to devote themselves as virgins to God.

There are other, lesser reasons, too, for the Church’s belief in Mary’s perpetual virginity. Many of them, in my opinion, stem from the early Church’s view on sex. Unlike their Jewish ancestors, the early Church considered sex to be a vile act, necessary only for producing children. It was laden with the sin of lust, and should be avoided except for procreation. In this light, it was necessary for Mary to be seen as perpetually virgin, because if she was not, then she was guilty of the sin of (lustful) sex with her husband, Joseph. It also meant that God had chosen a vessel to bear His Son who was morally “dirty”, and so this dirt would rub off on Jesus. Even though Mary’s sins had been forgiven in advance, that didn’t mean she was allowed to willingly delve into sin. Like Christians today, God expected her to hold to moral principles and if she sinned, to beg His forgiveness (by not repenting and asking for forgiveness, one rejects the gift of His mercy, in which case the sin remain).

For all of these reasons and many not here specified, Catholics believe in the eternal virginity of Mary as Truth. That is, there is no chance of it being wrong (it has been declared dogma by the Pope – an infallible truth). It is considered heresy to say Mary was not always virgin because that is a denial of the truth. However, that doesn’t mean that a person is going to Hell just because they do not believe Mary was a perpetual virgin, or that all Catholics will go to Hell if it ends up Mary really wasn’t always a virgin. The only requirement Jesus gave for Heaven is that we believe in Him. As long we acknowledge that Jesus is Lord and Savior, died for our sins and by His Grace redeemed us, and as long as we actively seek His forgiveness when we do wrong (and don’t just sin and be like, “Well, I’m forgiven, so I can do whatever I want), then anything else is extra. Jesus Himself shows us this. Jesus and his disciples were Jews, and held and kept many beliefs and traditions that modern day Christians believe are unnecessary (e.g. not eating pork, keeping the Passover, being circumcised, etc.). Their belief in these “false doctrines” did not and do not prevent them from joining with the Father in Heaven, because the crucial belief — that Jesus is the only way to God, and that his death and resurrection redeemed their sins — was one they held True above all others.

It is interesting to note that while many Protestants today ridicule Catholics for the belief in Mary’s eternal virginity, all the great Protestant founders — Luther, Calvin, Zwingli, Wesley, etc. — believed in Mary’s perpetual virginity, too.