Is the Push for a Better Education Destroying Childhood? 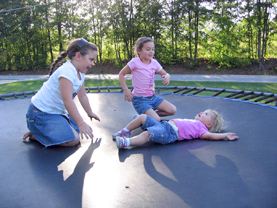 Is the drive to get our children into “elite” colleges like Stanford and Harvard ruining their childhood, and potentially destroying their creative ability?

Consider this excerpt from a recent news story:

“Nicole Imprescia, is suing the York Avenue Preschool in Manhattan, claiming 4-year-old Lucia received a substandard education before being pulled from the preschool last fall….Imprescia chose the school expressly to enhance little Lucia’s Ivy League chances. The York Avenue Preschool charges parents $19,000 a year and promises to prepare kiddies for the ERB (Educational Records Bureau) test — a standardized exam necessary for admittance to Manhattan’s hoity-toity (not to mention ritzy-snitzy) elite private elementary schools. Instead, Imprescia charges teachers threw her daughter in with younger kids where she was learning shapes and colors rather than boning up on math and science.”

Granted, $19,000 for a preschool is absolutely ridiculous. But I am not here to discuss whether this school is living up to its claims or not. Instead, I am here to expound on the growing push for “math and science” at the expense of kids’ childhood creativity.

It seems that everywhere I turn, I am hearing stories of kids being put into preschools as young as two and three, of “Baby Einstein” techniques designed to teach your kid calculus before they can walk. And I cannot help but be horrified.

Now, understand, I absolutely adore learning. If someone had chosen to teach me Spanish at age two, multiplication at four, and pre-algebra at six, well I would probably have soaked it all in. On the other hand, it might have turned me off learning forever.

Instead, my education was done the “old-fashioned” way. I didn’t even go to preschool (gasp)! My kindergarten was spent learning the alphabet and colors. I started using periods in my sentences in first grade. I was introduced to multiplication in second-grade, and didn’t even touch on pre-algebra until 7th. In high school, there were no “AP” science courses (except Chemistry, but the instruction was lacking, and when I graduated no one in the school had yet to receive higher than a two on the AP exam). Instead, my childhood was spent finger-painting and going to the beach with my parents; hiking in the hills and playing baseball. Instead of digging away at math and algebra in preschool, I stayed home and dug for earthworms, and learned from my mother that 1/2 cup and 1/4 of a cup of flour makes the 3/4 cups you need to make delicious chocolate chip cookies (hey look, fractions)! I learned about gravity from doing egg-drop competitions and from my father, who would lift me up and toss me in the air, catching me right before I hit the ground.

True, I did do “science” camps and take “field trips” with my parents — I went on nature walks in Coyote Hills with Dr. Quack, and to the Exploratorium in San Francisco on occasion — but the focus was always on enjoying the world around me and on having fun. No one cared if I understood the true nature of pigmentation and how we see color when I was playing with paints, and learning to my mother’s chagrin that blue and red do create purple walls.

Quite simply put, my childhood was fun. I was not a “slave to my education”, as so many children are quickly becoming, forced to sacrifice the delights of youth for a far-distant future that may never be realized (and how many parents consider whether their children will even want to go to Harvard, anyway? Sometimes, an Ivy League education can destroy a person’s potential more than it can help). It was the very nurturing of my creative energies, the ability to have my childhood and live it to the fullest that opened my mind and my heart to the sciences and the maths when the time came. Because in spite of my “inferior” education (compared to those children whose parents pay $19,000 a year since preschool for their education.), I still graduated top of my class, and I still got accepted into Harvey Mudd College, part of “the Ivy League of the West”. And I still graduated with honors, whereas many of my “superior” cohorts found the education too taxing and dropped out.

I truly believe that more and more parents are falling into the trap of seeing only the “end product”, and the “Ivy League” T-shirts and paraphernalia. They forget that kids just need to be kids, to laugh and to laugh and to create.  My education may have been guided, but it was never forced. I came to love learning as an integral part of who I was, rather than resent it because it meant I could not make mud pies with the other kids. If you stem a child’s creative need, then you stem their love for learning as well, and they’ll either become nothing more than intellectual machines, unable to be at peace with the world around them and with other people, and unable to “think outside the box” because their world is wrapped around them so tightly, or they will burn out and resent the material they are trying to learn, and then that $19,000 a year education will be for nothing anyway.